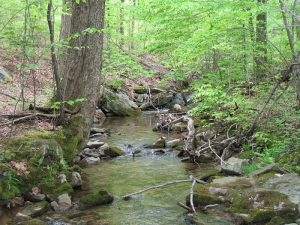 Rock Run is a cold water mountain stream in eastern Westmoreland County. It is the largest tributary to Linn Run. In spite of good trout habitat, Rock Run suffers from low pH and low alkalinity making it inhospitable to trout. Rock Run’s headwaters begin with two branches, the East and West, at an altitude of 2,660 feet and flows approximately 2.5 miles and drops 1,000 feet before joining Linn Run in Linn Run State Park. It flows through Forbes State Forest and a short stretch of private property before entering the park.

In 2005, Forbes Trail Trout Unlimited began a limestone dosing project on Rock Run with the application of 100 tons of limestone sand in the headwaters of the East Branch. To date, 450 tons of sand have been brought in to neutralize acidity and raise alkalinity. Most of the sand was applied to the banks of the headwaters of the East Branch. The chapter has also introduced brook trout eggs and fingerlings to the stream. FTTU has also conducted macro invertebrate surveys and tested pH and alkalinity at various locations on Rock Run. In 2017, we began taking monthly pH and alkalinity tests at the mouth since this is the furthest point on the stream from the limestone sand and would theoretically have the lowest readings.

Since the projects inception, improvement has been documented in macro populations, pH and alkalinity. In 2007, two years after the first limestone sand delivery, alkalinity at the mouth was 3.0 and the pH stood at 5.3. Averages for 2017-2018 stand at 6.4 pH and 5.9 alkalinity. In a 2007 electro-fishing survey by the PA Fish and Boat Commission turned up 16 brook trout measuring 3 to 7 inches. You can view the Ph and Alkalinity report for 2019 here Rock Run 2019.

Funding for the project has come from a Growing Greener grant, Hands for Service Volunteer grants from Prudential and the chapters own money. FTTU would like to thank Linn Run Park Manager Doug Finger and the park staff, Forbes State Forest District Forester Ed Callahan, The Loyalhanna Creek Watershed Association, Western Pennsylvania Conservancy and the PA Fish and Boat Commission. Thanks also to the Outside-In program for providing enthusiastic hard workers, all the FTTU member/ volunteers and especially project leader Ralph Koscianski for the many hours of hard work he has put into the success of this project.