Some rain would be nice.

The gauge reading on Linn Run was the lowest recorded since we started taking these reading in October 2017. The alklinity test was the highest of 2020.
The discharge for Linn Run, measured in cubic feet per second, was unavailable on the USGS website because, it appears, the flow was below the minimum measurement of 2.0. The median flow for this time of year is 2.5 cubic ft/sec.
In the photo at left, Rock Run appears to be dried up, but there is indeed a flow in at least two of three channels.

Flow goes down, alkalinity goes up, here’s the results of water testing for July.

In addition to our normal pH and alkalinity readings, dissolved oxygen and total dissolved solids tests were also done. We also conducted a macroinvertebrate study with leaf packs that had been soaking in the stream since December 2019.

Leaf packs are an alternative method of collecting stream dwelling organisms which is usually done with a kick net. With leaf packs, leaves from the banks of the stream are placed in mesh bags which are then anchored to the stream bed. In time, organisms take up residence among the leaves in the bag. The bags are retrieved, cut open and the contents inspected for macroinvertebrates. The macros are sorted by scientific order, counted and the results are compiled into an EPT Index.

The EPT Index stands for: Ephemeroptera (mayflies); Plecoptera (stoneflies) and Trichoptera (caddis flies). An abundance of these orders of insects is an excellent indicator of good water quality since they are pollution intolerant.

Within the Rock Run leaf packs, we found stoneflies, mayflies, hellgrammites, crayfish, cranefly larva and both cased and net spinning caddis flies. The results are scored on the basis of how pollution tolerant the samples are. An EPT score of 20 or less is ranked as “Poor”; 20-40 as “Fair”; and above 40 as “Good”. Rock Run scored 41.2, just enough to gain a “Good” designation.

Stoneflies are by far the most abundant macroinvertebrate inhabiting Rock Run, with the prehistoric looking roachlike variety making up the majority of the stoneflies. According to McCafferty’s book Aquatic Entomology, “(roachlike stonefly) Larvae are herbivoredetritivores (feeds on dead organic plant matter) and occur primarily in springs and streams of mountains, commonly in leaf packs.” There were also a lot of small thin stoneflies found possibly a variety known as Slender Winter Stoneflies. The next most abundant organism were sowbugs.

All looks good on Rock Run except we would like to see alkalinity of 10 or more, which we are trying to help by placing limestone sand in the headwaters. Also a little better diversity in the macros would give us a better EPT score. We suspect a kick net survey may turn up more mayflies and caddis since rocks and gravel are the type of habitat they prefer.

Water samples are collected at the mouth of Rock Run which has been treated for acidity with limestone sand since 2005. The sampling location at the mouth is furthest from the treatment site which is in the headwaters. The reasoning is, that if pH and alkalinity numbers are good here, then it should only be better further upstream.

• Water samples are collected from the stream in glass jars.
• pH is measured using meters that are calibrated using solutions at home.
• We use three different meters and average the results.
• Alkalinity is measured by titration.
• 100 ml of stream water is added to a beaker.
• A packet of indicator powder is added to the sample and mixed until it dissolves.
• The water sample turns green.
• An acid solution is then dripped into the water sample with a syringe-like instrument.
• The acid solution is added drop by drop by turning a dial on the device.
• The dial has a meter which records how much acid solution is added to the sample.
• Once the sample turns purple, it is then sloshed around in the beaker.
• The sample will turn a grayish green or gray/purple.
• More acid is added until the sample turns purple and stays that way.
• If it goes to bright pink, we’ve gone too far.
• Once the desired color is achieved, the number on the dial is recorded. We usually do the test twice and average the results.
• The more acid solution dripped into the water sample, the higher the number and the higher the number, the more alkaline the sample is.

In this case, the sample almost immediately turns purple, then goes gray when stirred, then back to purple when more acid is added. The meter reading was 2.2 which indicates low alkalinity. We generally get low alkalinity when the flow is up, and higher readings when the flow is low. We think this is due to the stream working hard to buffer out acidity from rain and run off in high flow conditions. Our pH readings are consistently good ranging from low to high 6 readings. A pH of 7 is ideal and we would like to see alkalinity of 10 or more, but readings of zero have been taken before the project began.

Ron’s video also shows some wild brook trout caught in Linn Run, some with gill lice. Gill lice is not fatal to adult trout but can reduce trout numbers when combined with other stressors. This is why the PA Fish and Boat Commission has switched the Trout in the Classroom program to rainbow trout to eliminate the chances of introducing gill lice to a stream. 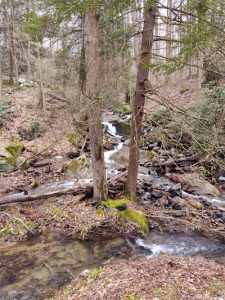 After skipping April, the Citizens Scientists were out at the mouth of Rock Run on the first of May.
A cold and rainy April has kept the flow high and the alkalinity low. 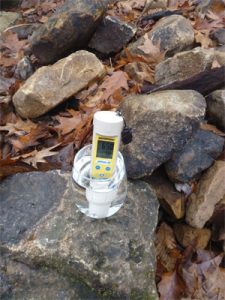 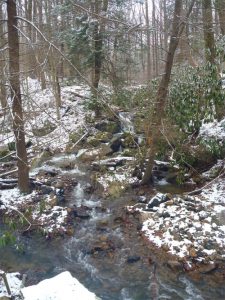 A new year of testing began at the mouth of Rock Run on January 5. The final numbers from 2019 showed an improvement in average alkalinity from 5.3 in 2018 to 6.2 in 2019.
The flow was moderately high and clear with some fresh snow on the ground.

Beautiful but cold, would describe conditions at the mouth of Rock Run this month as a light coating of snow greeted the testers.

Leaves are falling, the sun is low on the horizon, trout are on the move and taking up spawning positions. Here’s the numbers from Rock Run for November 2019.

pH is steady, alkalinity is still good at 12.8.

Alkalinity numbers have spiked upwards since limestone was added in August. Could it be from the limestone more than 2 miles upstream, or is it just from lack of rain and low flow, or maybe both?
This month’s flow was the lowest recorded in the 2 years we have been doing the monthly tests.
If you look at the monthly photos, you will notice more and more black rocks starting in July. These rocks were probably flipped over from high flow from heavy rain in June and July. Click the link RR PH and Alkalinity 2019 for the results from the past year.

Our next formal meeting will not be until February and will include our popular “Show n Tell” slide shows. Check back for details, date and time.