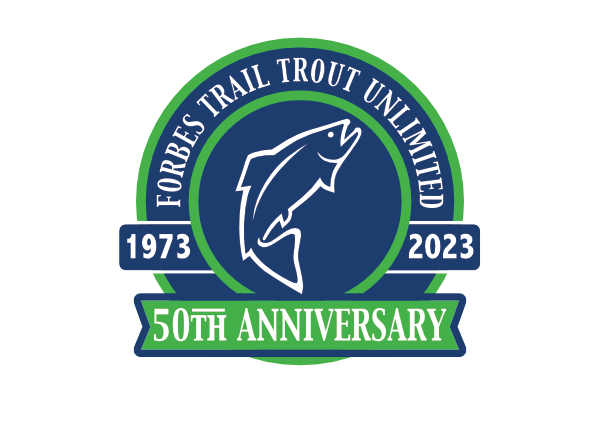 We already have a lot of fantastic prizes lined up for the 50th Anniversary Banquet raffle, but if you know of a business that would be willing to donate a prize, you can use the official letter available for download below.
Soliciting raffle prize donations is a good way for members to help the chapter put on a great banquet and celebrate our 50th year. Prizes should have a value of at least the price of a banquet ticket ($35). Thank You!

The Mountain Watershed Association and Yough Riverkeeper will hold a Yough Defense Party on Thursday, November 17 from 2:00 – 10:00 pm at the Falls City Pub in Ohiopyle, PA

Join us for an evening of celebrating the Youghiogheny River

Indoor and Outdoor space, we’ll be ready for cold weather with fire pits and an outdoor event tent!

WIN A KAYAK, DRY SUIT, OR ANOTHER OUTDOOR GEAR ITEM VALUED AT $1,500 OR LESS

Door Tickets are $20.00
The door ticket gets you entry to the event, free food, one free drink ticket, and an entry for the door prize. There will be a Will Call list at the event with your name.

Tickets are available through the Mountain Watershed Association.
MORE INFORMATION

Due to an increasingly bad weather forecast calling for rain and cold temperatures on Saturday, October 1st, we have reluctantly decided to reschedule the Veteran’s Fishing Day for next Saturday, October the 8th.

All else remains the same. The event will begin at 9 am and run til 3 pm. There will be drinks, snacks and a grilled lunch served by Boy Scouts. Fishing tackle will be provided for those without their own and there will be expert mentors for those who need assistance.

Here’s hoping for nice weather and that everyone can still attend.

The Forbes Trail Chapter of Trout Unlimited held its summer picnic for members, family and friends on Saturday, July 16th at Kingston Veterans & Sportsmen Club, east of Latrobe. Because of the Covid pandemic and related restrictions, this was the first picnic of its kind since 2019. It was a treat to be outdoors to enjoy both the summer weather and the camaraderie of family and friends.

There were raffle prizes, including a Yeti cooler, adult size fly rods and several fishing rod/reel combinations for the kids. The event also included a “swap” where used and excess fishing and fly-tying gear was sold. Activities for kids included painting wood cutouts of trout and tying a “crazy fly” with paperclips, pipe cleaners and hackle.

Adults tested their fly-casting skills on a par-3 casting course. And bean bags were constantly flying through the air on the corn hole courses. A buffet lunch was catered by Forks Inn, Ligonier and a trout decorated cake was provided by the Laughlintown Pie Shoppe.

Attendees enjoyed the laid-back atmosphere and opportunity to meet new friends and chat with some they had not seen for a couple of years. Some of the students from Ligonier Valley Middle School’s Outdoor Club, which the chapter interacts with, attended and were able to purchase used fly rod and reel combos at drastically reduced prices.

TU extends a special thank you to our partner Kingston Veterans & Sportsmen Club for hosting us.

Congratulations to the Raffle Winners 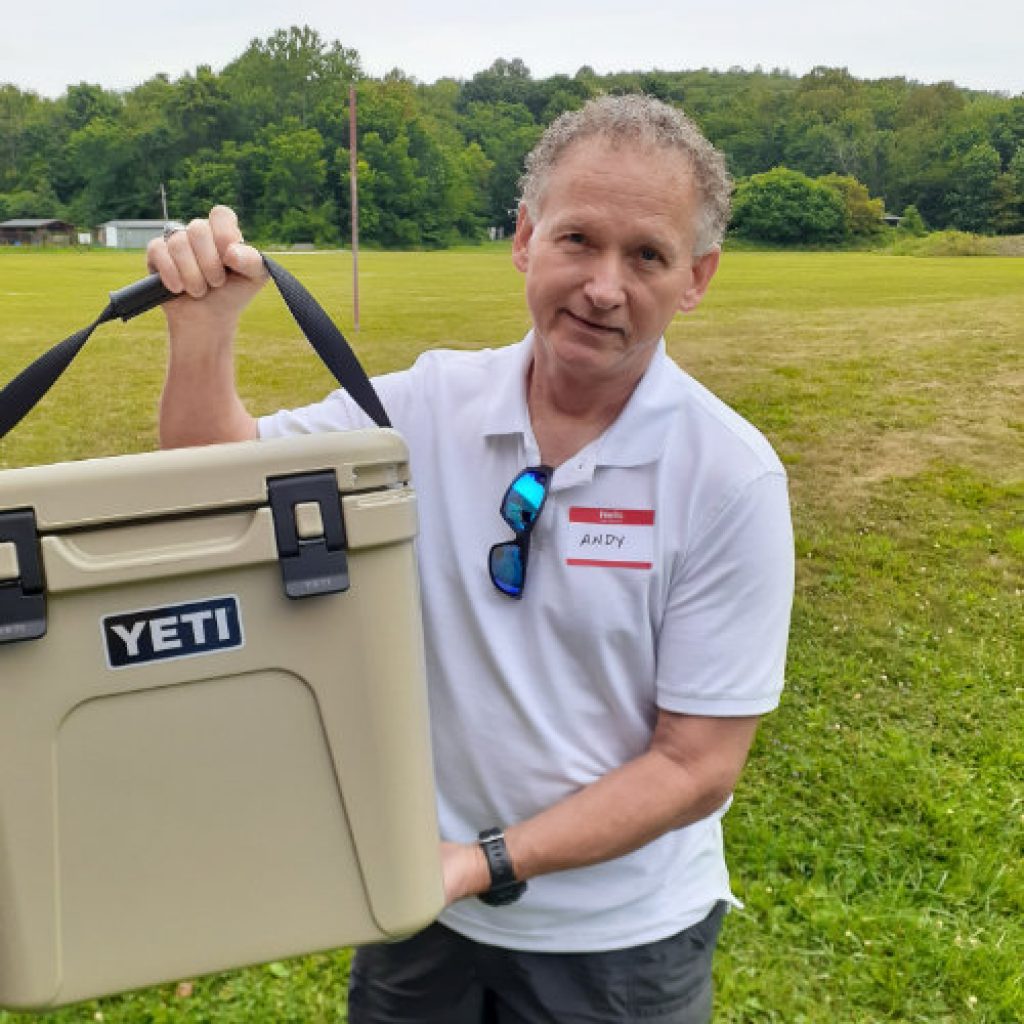 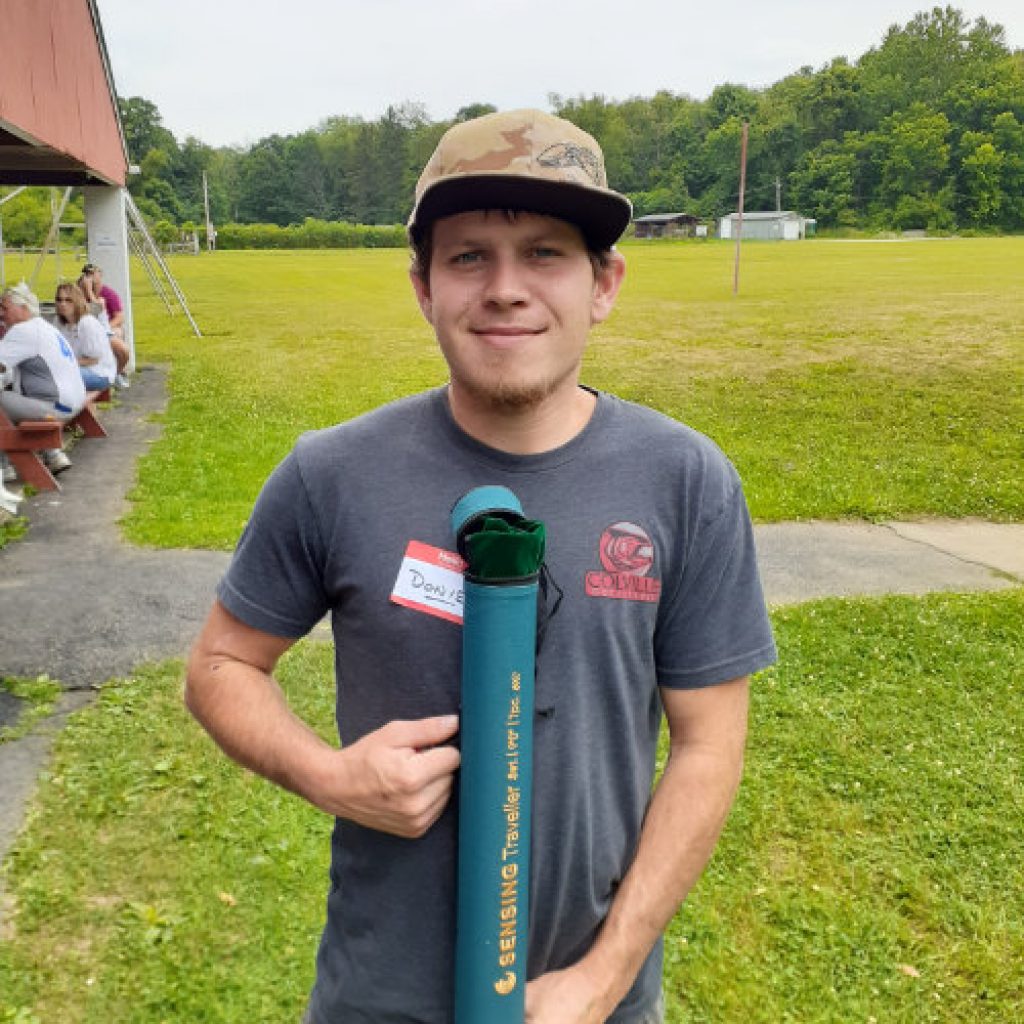 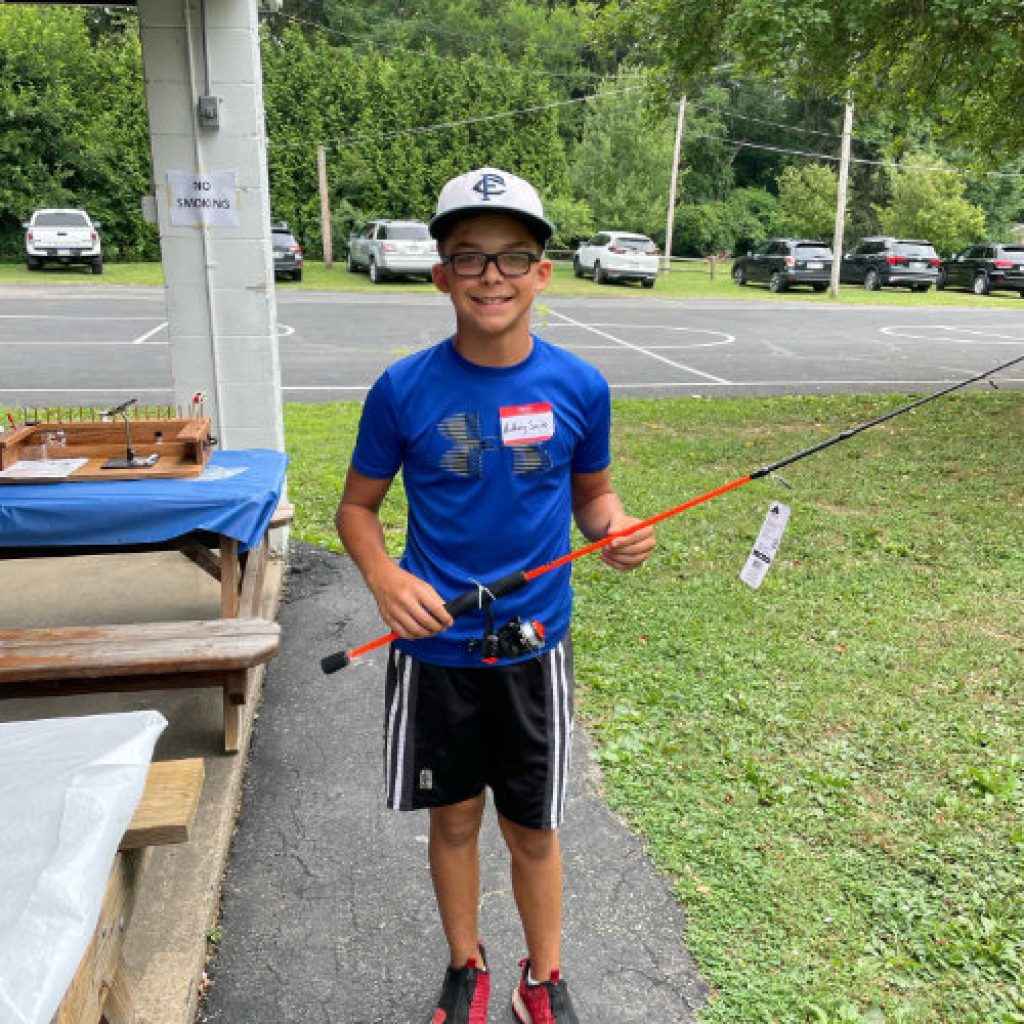 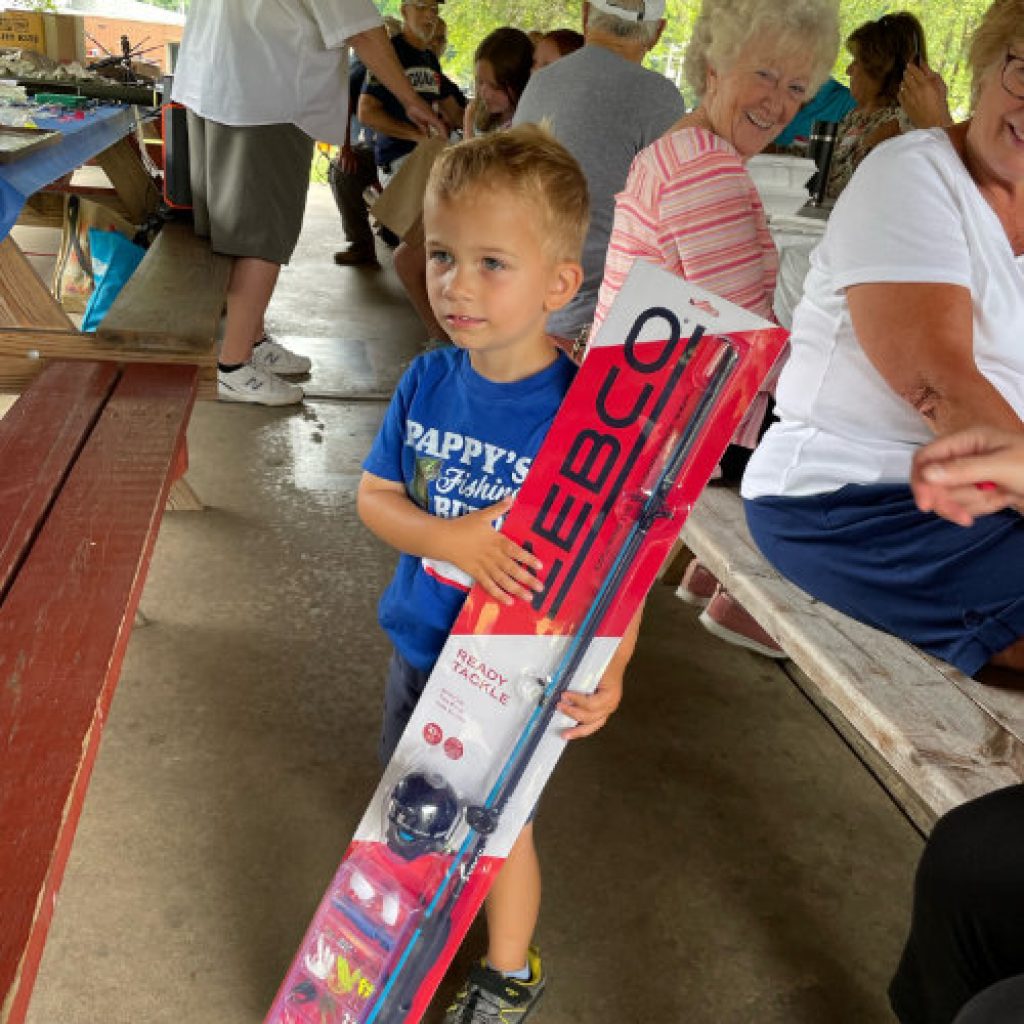 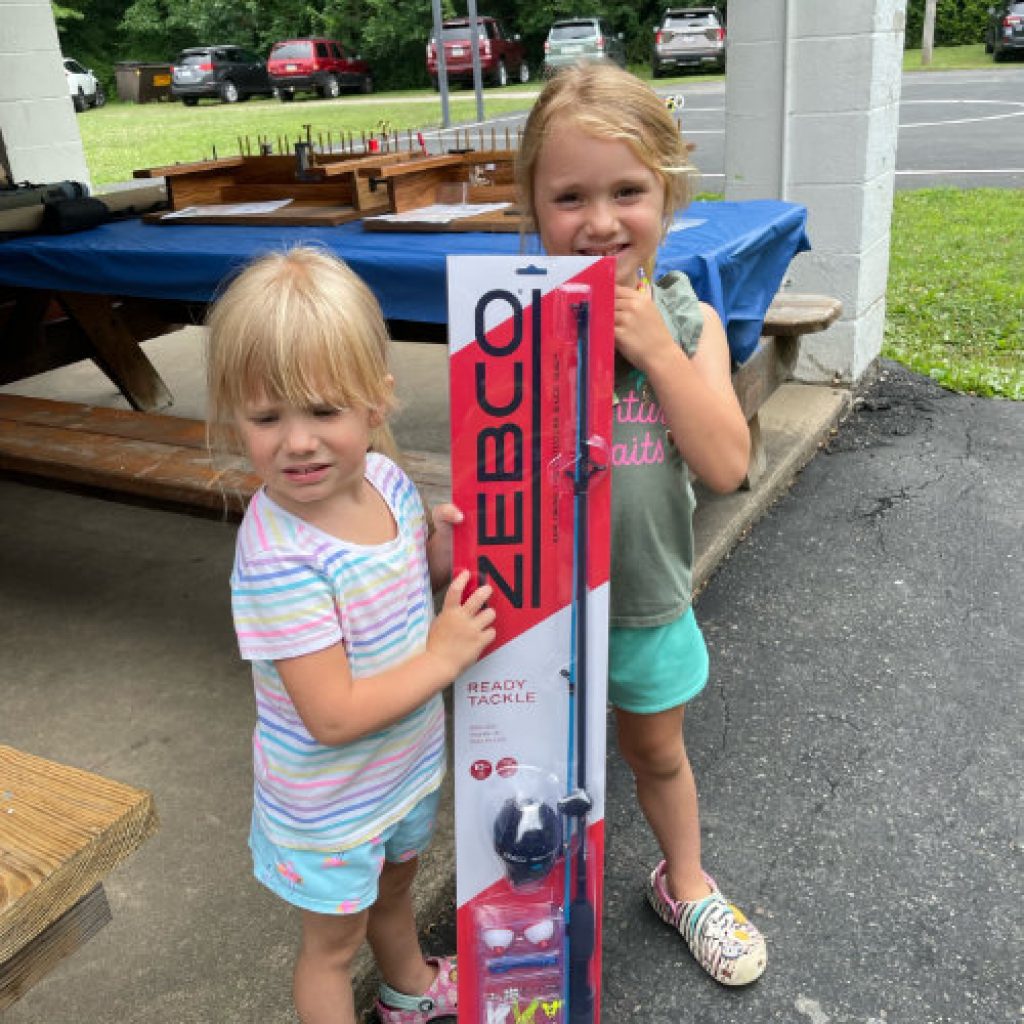 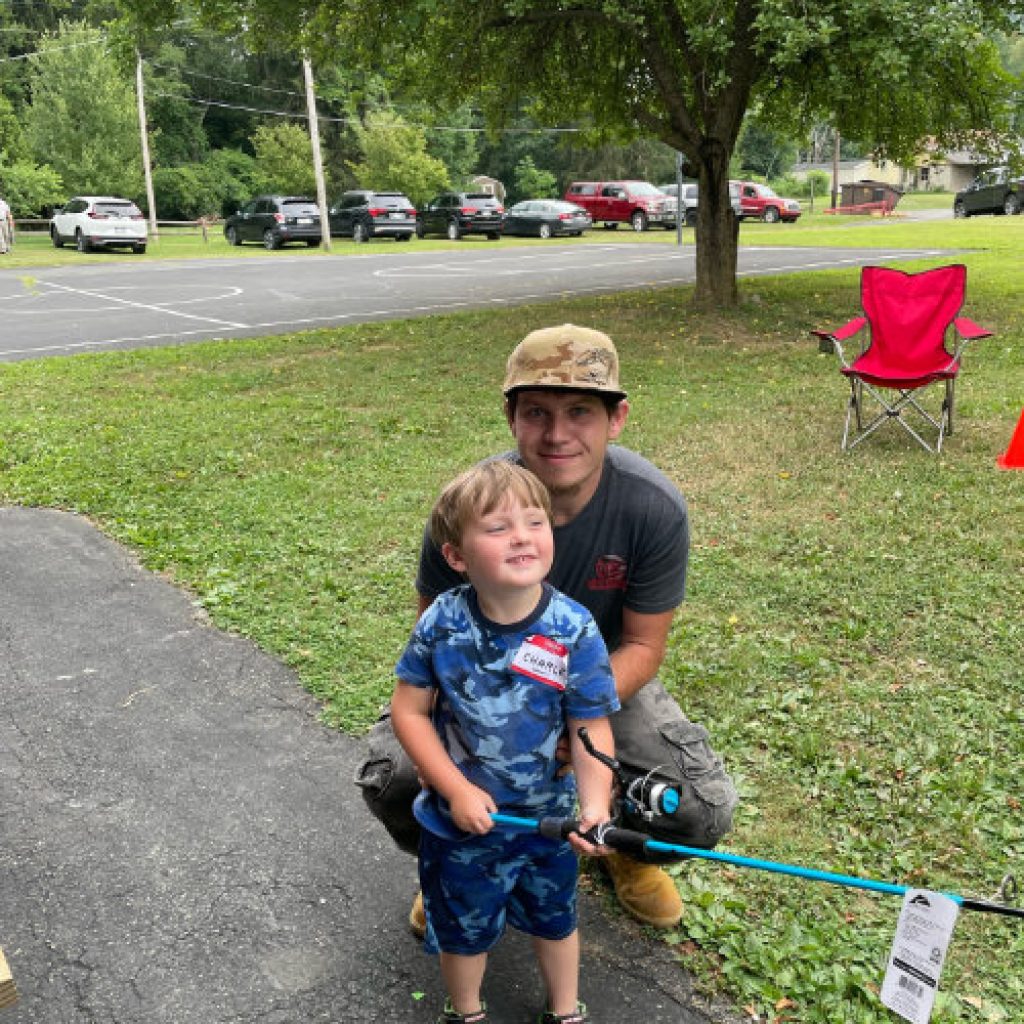 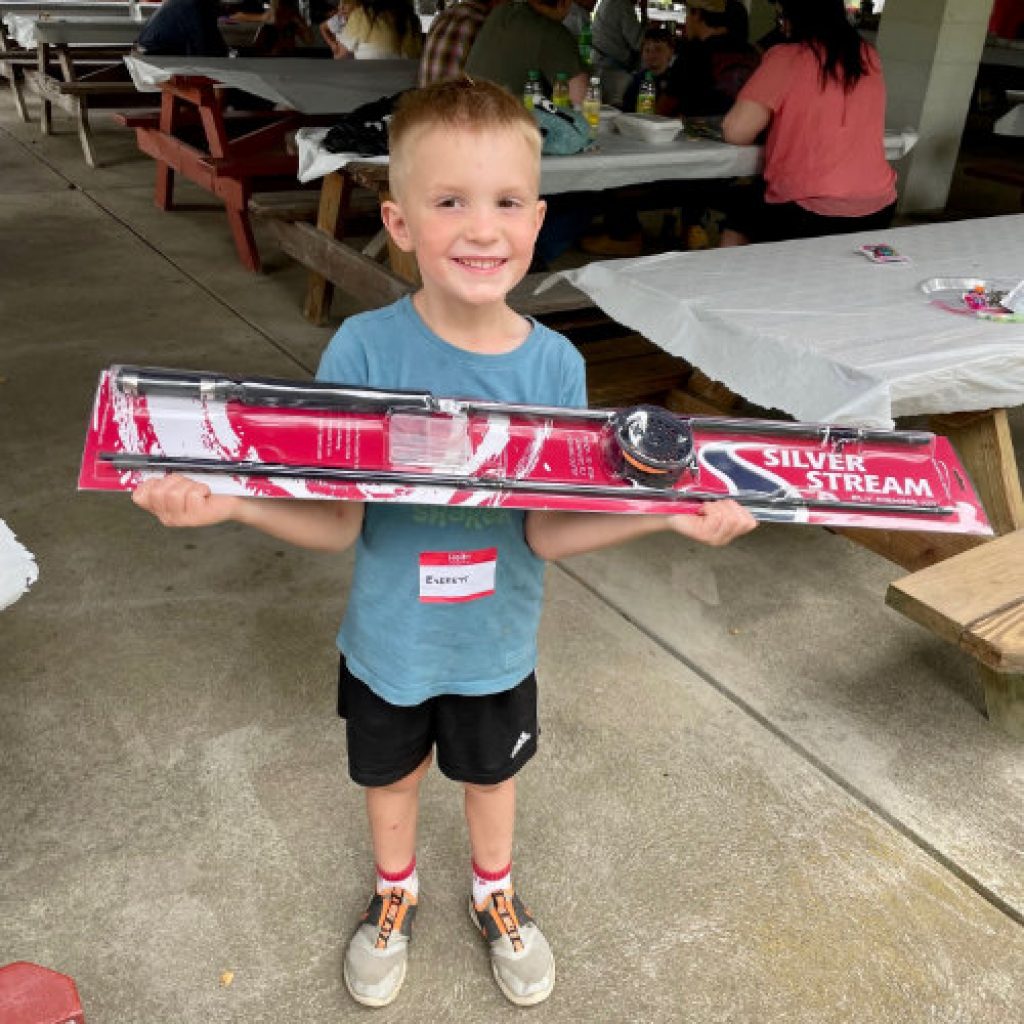 This month’s meeting will feature representatives from local organizations who will speak on conservation work in our area. Represented at the meeting will be The Loyalhanna Watershed Association, Powdermill Nature Reserve, Linn Run State Park, Ligonier Township, PA Fish & Boat Commission and The Westmoreland Conservation District.

Here’s a rare opportunity to get up-to-date information on conservation efforts in our local area.

Meeting starts at 6:00 pm at the Nimick Education Center in Ligonier on Wednesday, April 6, 2022. See the side-bar for directions.

After an absence due to COVID in 2020, the Military Veterans Fishing Outing is back. This year, it will be held on Saturday, October 2nd from 9:00 am to 3:00 pm at the Kingston Veterans and Sportsmans Club in Latrobe. The event is sponsored by the Kingston Club and FTTU.

The outing is open to all active duty or veterans of the U.S. military. Participants do not need to be disabled, but 30 spots are reserved for disabled vets. The event is free but you will need to register if you would like to take part. To get registered, email us at info@forbestrailtu.org. You can also participate as a mentor or volunteer. For more information on volunteer opportunities, contact us at the same email address.

Fishing will be done on the club’s lake for stocked trout and panfish. No fishing license is required and all tackle will be provided by FTTU. Volunteer mentors will be on hand to provide help for the disabled and instruction to those who would like to learn to fly fish. A grilled lunch will be served by the local Boy Scout Troop.

We have held this event in 2018 and 2019 and it has been an extremely successful and fun day. See the Community Service page for a report from 2019 and a slide show. Hope to see you there!

FTTU held a volunteer appreciation day on Wednesday, June 29, on Linn Run and invited the local media to attend. A picnic lunch was the chapter’s way of thanking everyone who volunteered their time and services for the study. Demonstrations of electro-shocking and macroinvertebrate collection were conducted. Josh Penatzer, Project Manager for Loyalhanna Watershed Association donned the battery pack and electrodes and probed the waters while volunteers followed with nets. The sampling was abbreviated because the water was low and they didn’t want to stress the wild brook trout. More extensive electro-shocking will be conducted in the spring during higher water flows and fish will be checked for gill lice then released unharmed.

Andrea Kautz, Research Entomologist for Powdermill Nature Reserve instructed volunteers on how to use nets to collect trout bugs. Alongside the stream, she coached the volunteers how to sort and identify the bugs which are indicators of water quality. They captured an assortment of mayflies, caddis flies and stoneflies in a matter of minutes. Both Andrea and Josh supervised the volunteers on June 16th when they sampled 12 sections of Linn Run including the major tributaries.

FTTU received a grant through the Foundation For Pennsylvania Watersheds to do a comprehensive study of the Linn Run Watershed with the end result being a Cold Water Conservation Plan identifying problem areas that can be addressed to improve conditions for the native brook trout inhabiting the watershed.

With assistance from our partners at The Loyalhanna Watershed Association, DCNR/Linn Run State Park, The Western Pennsylvania Conservancy, Powdermill Nature Reserve, Westmoreland County Conservation District, PA Fish and Boat Commission, The Ligonier Valley School District and our own citizen scientist volunteers, we have so far completed a visual habitat assessment, a macroinvertebrate survey and a water quality analysis. Look for the conservation plan to come out in 2022.

The Outdoors Swap Meet/Flea Market Sale scheduled for October 7 at the Annual Meeting has been postponed for a later date.
Check back for a revised date for the sale probably sometime in 2021.

FTTU’s meeting at the Lincoln Highway SupperMarket on June 3 has been canceled along with any chapter activity through the summer.
There will be no summer picnic fundraiser this year.

Our next scheduled event will be our monthly meeting on September 2nd. Check back for more details in August for a time and location.

The 2020 Rivers Conservation and Fly Fishing Camp scheduled for June 21-26, 2020, has been canceled. The camp was to be held at Messiah College near Yellow Breeches Creek. Messiah has canceled all events at the college through the end of June. We had three students from FTTU’s region accepted into the 2020 camp. All those accepted to the 2020 camp are automatically accepted to the 2021 camp scheduled for June 20-25 provided they inform the camp of their intentions to attend.

FTTU has also canceled our annual stream-side clean up of Loyalhanna Creek in the Delayed Harvest section in Ligonier that was scheduled for May 6, 2020. Keep Pennsylvania Beautiful, in collaboration with DEP and Penn DoT has postponed the statewide cleanup until fall. We will reschedule our litter cleanup of Loyalhanna Creek for sometime in September. As the pandemic situation improves, and the stay-at-home restrictions are relaxed, we will evaluate options for activities during the summer and early fall. Needless to say, the May meeting is also canceled.

Fly tying class for adults. Class is free and all materials are provided.

Get revved up for fishing season with our annual “Slide Show n Tell”. Enjoy presentations from members who travel all over to famous fishing locales. Bring your outdoor adventure pictures or video and we’ll put them up on the big screen.